Avengers:Infinity War is a cinematic masterpiece that captures the vibe of The Empire Strikes Back, if it were mixed with elements of a villain-focused heist movie and a much larger volume of source material at the time of its creation. In the Marvel Cinematic Universe (MCU), Infinity War is the 19th installment, and a clear stepping stone to its sequel in the upcoming “Avengers 4”. Anthony and Joseph Russo directed the widely acclaimed Captain America: The Winter Soldier and Captain America: Civil War, and they delivered once again while juggling the MCU’s largest heroic roster to date. While some fans may very well be disappointed in certain necessary cuts for time, the different heroes still largely get to shine. Infinity War may seem like it jumps around too much at times, but that should be expected from a movie that’s acting as part of the payoff of 18 prior movies. As well as different characters may shine in surprisingly limited amounts of time, several who have more screen time, such as Josh Brolin’s Thanos, Chris Hemsworth’s Thor, or Zoe Saldana’s Gamora, really deliver.

As far as the audience is concerned, the movie demands that you have at least somewhat of a familiarity with several of the other 18 MCU films. Without getting into spoiler territory, characters such as Hulk (Mark Ruffalo) , Spider-Man (Tom Holland), and Gamora act as conduits for the audience who may need a refresher course for narrative purposes. Minor supporting characters like Wong (Benedict Wong), Heimdall (Idris Elba), and Pepper Potts (Gwyneth Paltrow) do a strong job of quickly establishing some of the stakes for our heroes. Whether you are a casual fan of the movies, or a die-hard fan of the comics, the movie tries to juggle its duties in bringing something for everybody. Infinity War is not a true adaptation of Marvel’s The Infinity War or The Thanos Quest comic runs, but borrows or directly references enough material to please fans of the comics, without being overbearingly focused on cosmic elements that may cause a casual audience to tune out. While die-hard comic fans may be yearning for pivotal characters like Adam Warlock, he has yet to make his debut aside from being an Easter egg reference in both Guardians of the Galaxy movies. Additionally, as the major Fox rights acquisition deal is not fully worked out from a legal perspective, characters like Silver Surfer remain off the table.

Even though Infinity War clocks in at 2 hours and 40 minutes, time constraints and the plot demands to shift between different characters mean that not everyone gets the amount of screen time fans may like. While we get to see expected interplay between the Guardians of the Galaxy, or characters like Scarlet Witch (Elizabeth Olsen) and Vision (Paul Bettany), the real joy is in seeing pairings we haven’t gotten to see before. Seeing Tony Stark (Robert Downey Jr.) expertly trade barbs with characters like Dr. Strange (Benedict Cumberbatch) and Peter Quill (Chris Pratt) is as funny as Tom Holland’s Spider-Man acts like it is. For a movie that has several incredibly dark moments, there is still a good enough balance of humor that a full audience will laugh at loud throughout the film. Getting interactions between Captain America (Chris Evans) and Bucky Barnes (Sebastian Stan) once again leave you wanting more, while new interactions like Thor and Rocket Raccoon (Bradley Cooper) do the same. Combinations such as War Machine (Don Cheadle) and Falcon (Anthony Mackie) also feed off of each other well from a logical standpoint once again as one may expect given their characters’ military backgrounds. As far as interactions go, the stars from Black Panther do well in their screen time, particularly Okoye (Danai Gurira) and Shuri (Letitia Wright), which is more limited than the movie trailers may lead the audience to expect.

While one may be tempted to keep the focus on the heroes, the movie really shines when the focus is on “The Mad Titan”, Thanos. Josh Brolin delivers an outstanding performance and brings a depth to Thanos that quite frankly is missing from many MCU villains that aren’t allotted the time that the Marvel Netflix shows have to work with. Thanos is given a chance to have a backstory that gets to exemplify the motif that “every villain is the hero in his own story”. While he is an intergalactic threat, he is able to come across as grounded in a similar manner as a fleshed out human villain like Black Panther‘s Erik Killmonger (Michael B. Jordan). Since Tom Hiddleston’s portrayal of Loki (also perfectly played in this movie), Marvel has arguably struggled with making most villains as dynamic. With villains like Thor: Ragnarok‘s Hela (Cate Blanchett), Erik Killmonger, and Thanos, the MCU feels like it has finally nailed down the proper formula to create compelling villains with consistency, rather than a series of hits and misses. Thanos is a powerhouse and is very quickly established as a threat on a scale that puts past villains the Avengers or Guardians have faced such as Ultron or Ronan the Accuser (with the Power Gem no less) to shame.

While Thanos succeeds in becoming the MCU equivalent to the Star Wars franchise’s Darth Vader from strictly a movie standpoint, the same can’t be said about Thanos’ Black Order. While Ebony Maw (Tom Vaughan-Lawlor) particularly shines, Proxima Midnight (Carrie Coon), Corvus Glaive (Michael Shaw), and Cull Obsidian (Terry Notary) are simply victims of so many actors needing to share screen time. Each member of the Black Order has a unique skill set, and due to no fault of the actors we simply don’t get to see each member’s full potential. In a film featuring over 20 heroes, some villains are bound to suffer in the name of screen time and storytelling. In the context of Infinity War also setting up the untitled Avengers 4, the lack of larger depth for the villains outside of Thanos is a letdown, but an understandable one as the film plays its course. After all, Thanos is the main threat, and everything else, including the still lingering fallout from Civil War is secondary. 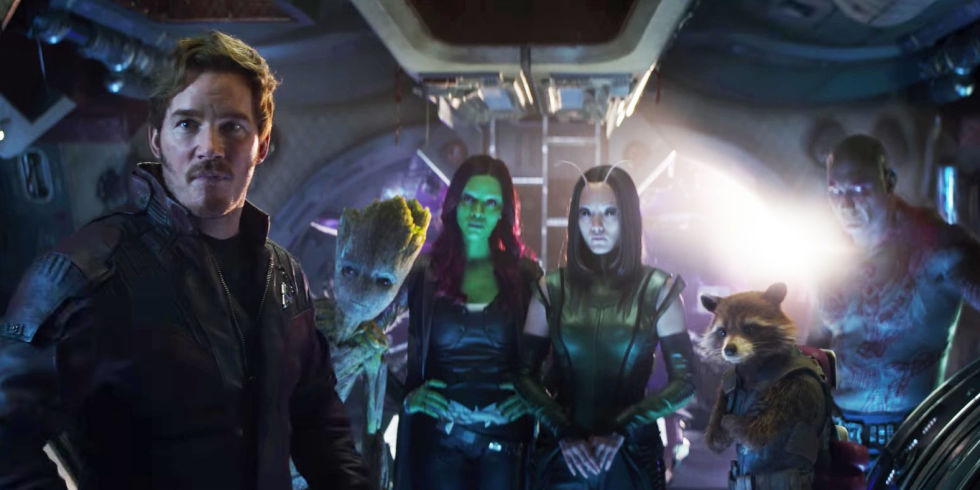 Where ambiance is concerned, Infinity War continues Marvel’s trend of being second to none. The film has an appropriate score, even letting the Guardians work in their humor through music. Whether the location of the film is set at Titan, Wakanda, or somewhere new, the lighting and backdrops are perfectly done. There is a particular sequence with the Guardians (though particularly Starlord and Gamora) just after Thor begins his separate story arc, where the mood shifts and the backgrounds shift dramatically and instantly for storytelling purposes. Without giving away what happens in the plot, it is a small cinematic feat that will make you briefly question a previous “Phase 2” Marvel movie’s inability to properly show the same effects. There is another scene roughly halfway through the film, where Thanos has a particularly shocking moment, and everything is only amplified by the lighting, ambiance, and how that moment impacts the rest of the film.

Infinity War is a cinematic event, similar to Star Wars in its grandeur. While it is possible to see the film without seeing the other 18 current Marvel films, it really is better to have at least seen some of the previous films for narrative purposes. To have a better appreciation of specific character interactions, a better understanding of the infinity stones themselves, or an easier time following some specific banter, a familiarity with the rest of the MCU is a good thing to have. If I were to recommend some mandatory MCU films for a better experience from “Phase 1”and “Phase 2” of the MCU, they would be The Avengers, Avengers: Age of Ultron, Captain America: The First Avenger, Iron Man 3, Captain America: The Winter Soldier, and Guardians of the Galaxy. As Infinity War really acts as a bookend for “Phase 3” of the MCU, however, the movies within Phase 3 are the true setup. Captain America: Civil War, Doctor Strange, Guardians of the Galaxy Vol. 2, Thor: Ragnarok, and Black Panther have the most direct tie-ins to the movie. If you were to binge anything before viewing Infinity War, the “Phase 3” movies should be your particular focal point.

While there are several characters I have neglected to mention in larger detail, there are no truly weak performances from an acting standpoint within the movie. Nebula (Karen Gillan) shows her tenacity, Drax (Dave Bautista) shows off his spirit and humor, and Black Widow (Scarlet Johansson) gets a few standout moments, and other characters still get to show off some of their defining traits. Marvel’s reasoning for keeping the nature of Peter Dinklage’s character a secret is for plot purposes, and he does show off the emotional chops that fans of Game of Thrones have come to expect. Black Panther (Chadwick Boseman) continues to settle in his role as a king, Mantis (Pom Klementieff) continues to show her chemistry with the rest of the cast, and Groot (Vin Diesel) still gets his fun moments as well. The absence of notable characters from the trailers like Hawkeye (Jeremy Renner) and Ant-Man (Paul Rudd) are also addressed within a movie that ties up plenty of MCU loose ends aside from the questions that arise from the trailers.

Overall, Infinity War succeeds in juggling a large amount of characters, though does have to jump around in order to meet the screen time demands of them all. On a cinematic level, it’s a rousing success that should be viewed on an IMAX screen where possible. It may have moments that could be too dark for some young kids, but balances the high stakes of the movie with great humor. Though I haven’t addressed the ending of the movie, all that needs to be said is that it really is the most striking ending for an MCU film so far. As a standalone film, it is a very strong entry in the MCU with multiple strong acting performances, including a villain that lives up to the massive hype. In the larger context of being a “part one” of sorts for Avengers 4, it raises the stakes on a level that no other Marvel film has done, and sets the stage for a sequel that will alter the landscape of these films forever. Even on a standalone basis, this movie achieves the goal of altering that landscape, and should be considered a must-see for any fan of the MCU. Personally, I view Black Panther and Captain America: The Winter Soldier as the top two films in the MCU, but even just after one viewing and a few days to digest what I saw, Infinity War is easily a top-five MCU film for me. It is a crowning moment for the MCU, it lives up to its massive hype, and leaves the audience demanding where “Earth’s Mightiest Heroes” go from here on out.

Ed Miller - July 8, 2020
0
If you’re a craft beer enthusiast who waits in line for limited releases, trades hyper-local efforts with friends and keeps track of...

Ed Miller - July 8, 2020
0
If you’re a craft beer enthusiast who waits in line for limited releases, trades hyper-local efforts with friends and keeps track of...