On Thursday night, the Washington Capitals captured the franchise’s first #StanleyCup with a thrilling 4-3 victory over the Las Vegas Golden Knights. Although the series ended in just five games, many of the games came down to the final seconds.

It has us thinking about the most epic Stanley Cup Finals throughout history. Which series was the best? Who dazzled us with the most intense battles for hockey glory?

We got you covered.

Bobby Clarke and the rest of the Broad Street Bullies knocked off Bobby Orr and the Boston Bruins to become the first non-Original Six team, since the 1967 expansion, to win the Stanley Cup. It only took seven years to win the Cup.

In the epic Game 6, Flyers goalie Bernie Parent had 30 saves, helping the Flyers to a 1-0 victory. 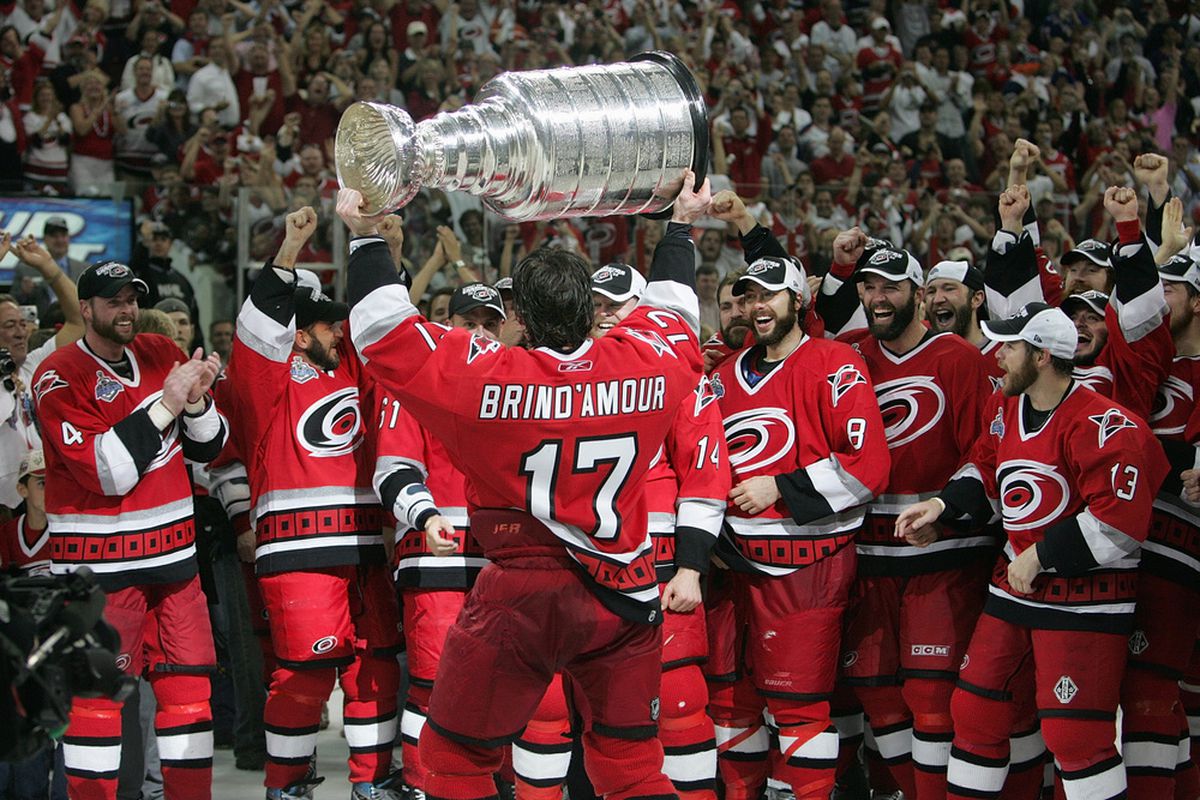 The 2006 Stanley Cup Finals were a shocker in the two teams featured. Both were former WHA teams but neither made the playoffs the previous season and the Edmonton Oilers were the lowly 8th seed.

After the Hurricanes took a 3-1 series lead, Edmonton fought back to tie the series and send it to a decisive Game 7. But the Hurricanes would not be denied their first Stanley Cup. With a 2-1 game with a little over a minute to play, Carolina’s Justin Williams scored an empty net goal to seal the win. Cam Ward would win the Conn Smythe Trophy and the Oilers are still searching for their first Stanley Cup since the Mark Messier days.

Leading 2-0 in the 2nd period of Game 7, Montreal’s Jacques Lemaire hit a shot from just over center ice that never should’ve made it into the net. The momentum shifted tremendously and the Blackhawks’ collapse would be solidified after a pair of goals from Montreal’s Henri Richard, resulting in a 3-2 loss. This was also the coming out party for Canadians goalie Ken Dryden, which would go on to author the best hockey book of all time titled, “The Game.”

The 2001 Stanley Cup finals featured the top seeds from their respected conferences, which had the makings of the clash of the titans. With the Devils leading the series 3-2, Colorado’s goalie Patrick Roy went on ‘lockdown mode’ and only allowed one goal over the final six periods of the series.

As a result, Colorado would capture their second Stanley Cup. But what makes this truly meaningful is the sight of Ray Bourque raising the Cup after it eluded him for 22 years.

The 2003 Stanley Cup was a battle of strong goaltending amongst Martin Brodeur and Jean-Sebastian Giguere where both goalies would combine for four total shutouts in the seven game series. There was also drama due to brothers Scott Niedermayer (Devils) and Rob Niedermayer (Mighty Ducks) facing each other.

The Devils were up 2-0 before the series shifted to Anaheim where the Mighty Ducks would win two nerve-wracking overtime thrillers to tie the series. Eventually the series would go to Game 7 where the Devils dominated for a 3-0 win but it would be Giguere who took home the Conn Smyhe Trophy, marking the first time the MVP went to the losing team since 1987.

However, this series is mostly known for the infamous Paul Kariya shot in Game 6. After being blindsided by the Devils’ Scott Stevens with a vicious hit, Kariya had to leave the ice, but later returned for an epic goal with the commentators screaming “Off the floor, on the board!”

This was the last Stanley Cup before the impending lockout and it was entertaining enough to last us for two years before we got to see another Stanley Cup final.

The Lightning’s first Stanley Cup came in dramatic fashion as they came back from a 2-3 deficit to the Calgary Flames.

Game 6 would leave the Flames wondering what might have been as they lost a heartbreaker in double overtime at home after Tampa Bay’s Martin St. Louis scored the game-winner early in the second overtime period.

The Oilers and the Flyers finished the NHL regular season with the two best records with both teams making the Stanley Cup finals, setting for a rematch of the 1985 series.

The Flyers, facing a 1-3 deficit in the series, would battle back with two one-goal victories to push the Oilers to a deciding seventh game. However, it was not meant to be as the Edmonton dynasty, which consisted of Wayne Gretzky, Mark Messier, Jari Kurri, Grant Fuhr, and Paul Coffey, would win their third Cup in four seasons with a 3-1 victory in the final game.

Despite the series ending in six games, there was more than enough drama to last a lifetime.

The Blackhawks and Bruins combined for five overtimes in the six game series, with Game 1 going to triple overtime before Chicago’s Andrew Shaw scored the winner.

The series could not have been closer.

Heading into Game 6, the first four games had been decided by only one goal, so a nail-biter was expected in Boston. Chicago entered the game with a 3-2 series lead and trailing 2-1 on the scoreboard with less than 80 seconds left in the game. It appeared we were set for a legendary seventh game. Not so fast.

Chicago’s Brian Bickell would score the tying goal off of an assist from Jonathan Toews. Bruins fans braced themselves and anticipated the game going into overtime but the Blackhawks didn’t get the memo.

17 seconds later, Dave Bolland would score the game-winner, stunning Bruins fans in attendance on their way to their fourth Stanley Cup.

The 2009 Stanley Cup was a rematch of the 2008 finals where the Red Wings bested the Penguins in 6 games.

With the series tied 2-2, Detroit dominated Pittsburgh with a 5-0 victory in Game 5 and many believed they were well on their way to back-to-back championships. However, the Penguins would battle back to claim a 2-1 victory in Game 6 to head back to Detroit for the final game.

Down 2-1 to Pittsburgh with a few seconds away, Detroit’s Nicklas Lidstrom at the left faceoff circle came within inches of scoring to tie the game. But Pittsburgh’s Fleury made a diving stop with two seconds to preserve the win and conquer the demons from the previous Stanley Cup loss.

The devoted Rangers fans had waited 54 years to see their team raise the Stanley Cup, but it would not come easy.

The Rangers seemed primed and ready to hoist that title which had eluded them for decades after going up 3-1 in the series. The Vancouver Canucks were playing desperate and laying it all on the line to win the next two games, forcing the final and deciding game.

New York’s Brian Leetch and Mark Messier had carried the team and were not about to let the championship slip from their fingers. In front of an electric crowd at Madison Square Garden, Messier would score the winning goal to push the Rangers past the Canucks to capture Lord Stanley.

Despite Playing In Just One Game, Steven Stamkos’ Postseason Is An Instant-Classic

Great Divide Brewing Company Wants To Give You The Opportunity To...

Ed Miller - October 21, 2020
0
For more than two and a half decades, Great Divide Brewing Company has created what it calls "distinctly Denver beer," winning countless...

The Flaming Lips Perform Concert With Each Audience Member Inside A...

Great Divide Brewing Company Wants To Give You The Opportunity To...

Ed Miller - October 21, 2020
0
For more than two and a half decades, Great Divide Brewing Company has created what it calls "distinctly Denver beer," winning countless...